We’re gearing up for a great Christmas at Bodnant Garden – the Winter Garden is getting a seasonal spruce-up, the brazier is being fired up in The Dell, festive fare is being prepared in the Pavilion tearoom and our volunteers are laying on traditional Christmas craft activities for families.

But we won’t be resting on our laurels after The Big Day…we’re already planning a host of events for the New Year too so make a note in your shiny new 2014 diaries.

In January we will be launching a photography competition. So many people send us amazing pictures of their visit to the garden, so we thought it’s time to showcase all that artistic talent! There will be some great prizes on offer and the chance to see your images made into a Bodnant Garden calendar for 2015. 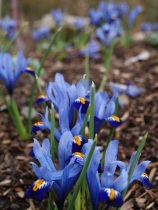 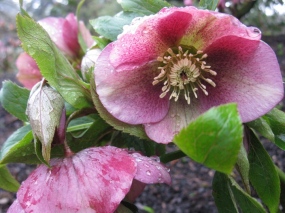 There’s plenty to inspire photographers in our Winter Garden

The competition will run up to October and we’ll invite visitors young and old to submit their pictures of the garden through the seasons. Alongside this we’ll also be running workshops with a professional photographer throughout the year. So get those cameras warmed up.

In January we’ll also be holding specialist walks around the garden including a Secret Bodnant Tour – giving you chance to see parts of the garden normally closed to the public – and a tour with our nursery propagator who will talk about winter colour in the garden. 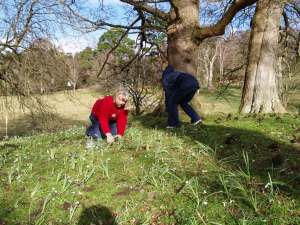 More walks follow in February – including one on the history of Bodnant Garden – and of course we’ll be starting snowdrop planting. Over the last five years we’ve set ourselves the task of planting a meadow full of snowdrops in the Old Park at the rate of 10,000 every winter. No small feat…so we’re inviting you to drop by and help us.

This takes us up to the beginning of spring and our big event…the opening of the Yew Dell. A formerly private area of the garden, the ropes will be taken down for the first time in March.

Laid out in the 1880s by Bodnant Garden’s creator Henry Pochin, the Yew Dell is a 3.5 acre wooded area with stream running through it; cool, calm and tranquil, reminiscent of a HimalayanValley, planted with mature rhododendrons and hydrangeas overhung by oak, ash and magnolia. It is also home to many rare Bodnant Hybrid rhododendrons, some found nowhere else in the garden, and some grown from seed collected by plant hunters George Forrest and Frank Kingdon-Ward.

Over the years the area has remained untouched apart from basic management and in the last two years gardeners have been weeding, cutting back the brambles and renovating shrubs and trees, as well as repairing paths, drains and banks.

To mark the opening of this unique and historic part of the garden we’ll also be running plant hunter activities for families. But that’s all to come…watch this space for further details.

Of course there’s still Christmas, and it’s a bit special at Bodnant Garden this year. It’s the first time we’ve been open all year round (excepting Christmas Eve, Christmas Day and Boxing Day) and to get people into the spirit we’re opening part of the lovely Old Mill in The Dell. Our volunteers have been busy transforming the listed building into an Elves’ Workshop, where families can come and try their hands at festive crafts every Saturday and Sunday until Christmas.

There will be a brazier in The Dell too and hot drinks and snacks available, plus special Christmas menus at the Pavilion tearoom, and not forgetting our new Winter Garden which was opened just last year.

Whatever you’re planning this Christmas and New Year we hope you’ll include Bodnant Garden in your festivities. For more details call 01492 650460, check out our website www.nationaltrust.org.uk/bodnant-garden or Facebook page https://www.facebook.com/BodnantGardenNT