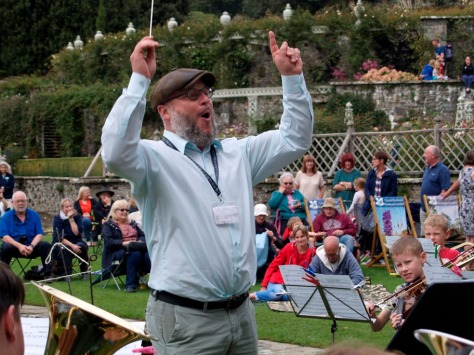 If we had rafters at Bodnant Garden, they would’ve been well and truly raised last week by the musicians of Denbighshire Music Co-operative, who gave us a concert finale to our summer events.

These talented youngsters took visitors on a musical tour of the world, from Spain to India and all stops in between – via brass band to stadium rock – and the bhangra-style dance on the Canal Terrace is something we won’t forget for a long time to come. It brought down the curtain on a summer of family activities at the garden, in joyous style.

Our thanks to everyone at Denbighshire Music Co-operative. This group is a not-for-profit organisation, run by the teachers for the benefit providing tuition for pupils in the area. For more information see their website: http://www.denbighshiremusic.com

Perhaps these images, by our young volunteer photographer Gethin Mullock-Jones, will inspire you to get music-making (or even volunteering for Bodnant Garden!) 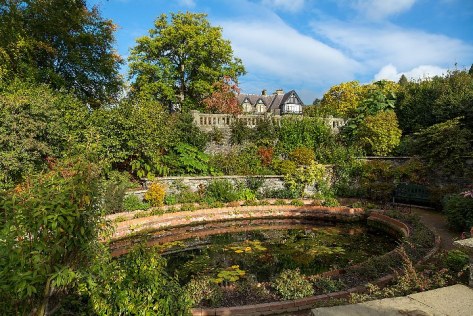 This spring we’re taking the plunge and redesigning one of the oldest features of Bodnant Garden – the Bath.

The oval pool, dating back to Victorian period, lies just below the Front Lawn of Bodnant Hall, tucked away behind high sheltering walls and hedges. Gardeners are transforming ageing, shrubby planting into a miniature exotic paradise, filled with lush foliage and brightly coloured flowers which can take advantage of the sheltered microclimate. It’s the finale of two years of renovation in the area, following devastating winter storms of 2013.

The Bath was created by Henry Pochin, who founded Bodnant Garden as we know it when he bought the estate in 1874. Pochin laid out the upper East Garden in formal Victorian style, with lawns intersected by paths, stone steps and balustrades and a terrace linking the house to the garden.

It’s thought there was an existing pool in the area dating back to Pochin’s predecessor William Hanmer – today the interlinking pool just below the Bath is known as Hanmer’s Pool. Under Pochin, water was channelled from the top of the garden into the Bath, then via Hanmer’s Pool and into a stream leading down through The Rockery to The Dell.

In his diaries of 1880 Pochin said: “We have finished the bathing pool and the archery” (referring to the now-famous Laburnum Arch.) The surrounding walls of the Bath were added later at the turn of the 19th century, probably by Pochin’s grandson Henry Duncan McLaren when work began on the construction of the nearby Italianate terraces.

Judging by the terracotta tiled walls and steps leading into the water of the Bath (and by it’s title) we think the family used to take dips here, perhaps to cool off after a game of tennis on the nearby Front Lawn? The name has changed over the years – it’s also been known as the Oval Pond and Gold Fish Pool- and there have been attempts to keep Koi Carp in the pool, which fell victim to otters and herons. The only bathers there now are a young colony of water lilies.

In recent years there have been ideas to refresh poolside planting, predominantly mature shrubs including rhododendrons. Some more tender herbaceous plants have been tried and tested there and done well in their sheltered spot (seen above). Storms of Christmas 2013 gave the revamp a new impetus when an old oak tree came down, damaging walls and ripping up beds.

The fallen oak tree near the Bath in 2013

Work to repair nearby lawn and beds 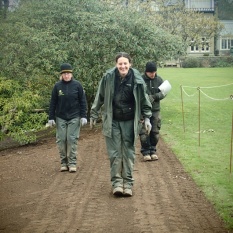 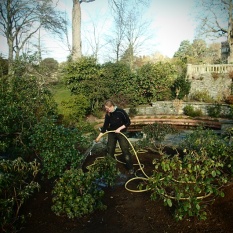 After much clearance work by the garden team, students redesigned the nearby beds in 2014 and 2015.  Old shrubs have been replanted with mixed planting to give all-year interest and a new section of lawn laid where the oak tree once stood.

This spring work begins on the Bath area itself. Gardeners have begun removing old shrubs ready to start planting. Area supervisor Bill Warrell says: “Tree ferns, bamboo, bananas, dahlias and cannas are just some of the many plants we’ll be using, with the scheme planned to be at its best from July until the first frosts.

“Recently we’ve removed plants that didn’t fit in to the new design, and in the coming weeks we’ll be carrying out repairs to the walls, reducing the height of the hedge on the east side and improving the soil. Planting will take place around the middle of May, once the weather has warmed up for the scheme’s more tender specimens.”

Thees are just some of the new plants which will be going into the beds. Come along over the next couple of months and see the planting taking place – and even better, come back in summer and enjoy the results for years to come. 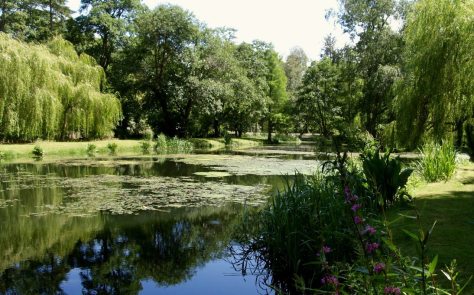 In Spring 2015 we will be revealing part of Bodnant Garden never before seen by the public.

Our Conwy hillside garden is well know for its Italianate Terraces, expansive Shrub Borders and pinetum in The Dell. Until now visitors have not been able to walk further than the dramatic Waterfall Bridge in The Dell, but from April next year they will be able to explore what lies beyond…The Far End.

It is the latest private area on the fringes of the garden to be opened to the public and part of our vision for the future – in 2012 we opened The Old Park, a wildflower meadow, and in 2013 the Yew Dell, a wooded Himalayan style glade. In 2017 we will also be opening Furnace Wood, to the west of the garden. 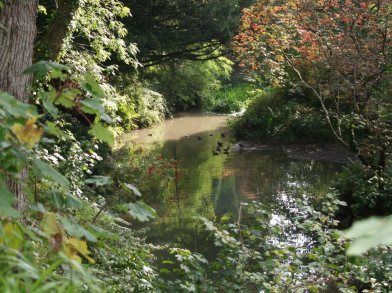 The Far End is a tranquil riverside haven which follows the course of River Hiraethlyn, forming pools and ponds as it winds along, finally opening out into a lake. It is one of the oldest parts of the garden, originally laid out by Bodnant’s creator Henry Pochin from the 1870s who envisaged it as The Wild Garden – blending native and exotic trees to form an area very different from both the formal terraces at the top of the garden and from other wilder, informal areas of the garden too.

Pochin began by creating paths along the riverside and planting Asian and American conifers, some of which were new to Britain being introduced by plant hunters of the Victorian era. His successors continued planting along the banks of the river, adding a Skating Pond and an Arts and Crafts style boathouse (seen above).

Perhaps because it has never been open to the public and intensively managed, this area has a very different character from anywhere else in the garden. Making your way upstream from the steep sided Dell the valley opens out more widely; the conifers here don’t soar overhead in enclosed space but blend into the hillside along with wide drifts of deciduous natives an exotics – Chinese magnolias and Japanese acers mingling with waterside willows. The water doesn’t roar and rush quite like it does through the waterfall-powered gorge of The Dell (though it has done just that, quite spectacularly, when in flood!)

The Boat House on the tranquil Skating Pond

The riverside here is less manicured with its reeds and bogside planting and the whole effect if less dramatic is more naturalistic, with a charm all of its own. It is a paradise for wildlife too; here you’re more likely to see birds and even otters enjoying the calm waters.

Over the last few years area supervisor Maxine Singleton and her team have been renovating banks, beds and paths, creating a new circular walkway and bridge which will give visitors an easy access, level route around this beautiful part of the garden. It hasn’t been without setbacks – the floods of winter 2012 caused extensive damage as water swept away vast quantities new riverside plantings, but the work has continued and the ropes will come down in spring 2015.

The Far End in autumn

If you’d like to have a preview of The Far End and Furnace Wood before opening we’re running Secret Bodnant walks on the second Wednesday of every month, at 2pm. There’s no extra charge (normal garden entry applies) but call 01492 650460 to book a place as numbers are limited. For more details about Bodnant Garden call 01492 650460, check out our website www.nationaltrust.org.uk/bodnant-garden or Facebook page https://www.facebook.com/BodnantGardenNT 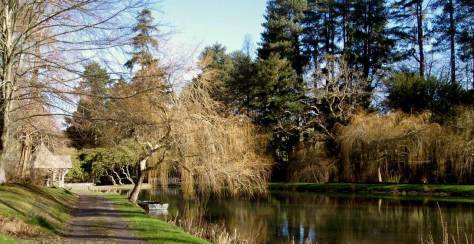 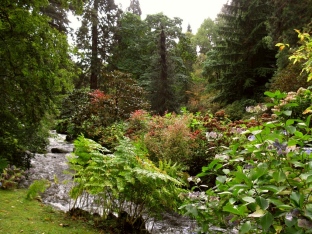 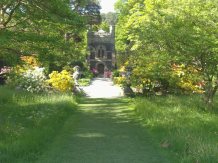 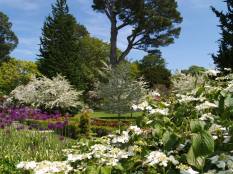 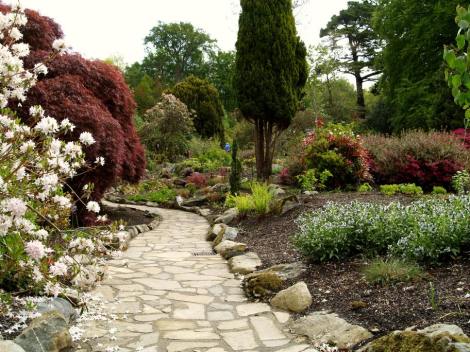